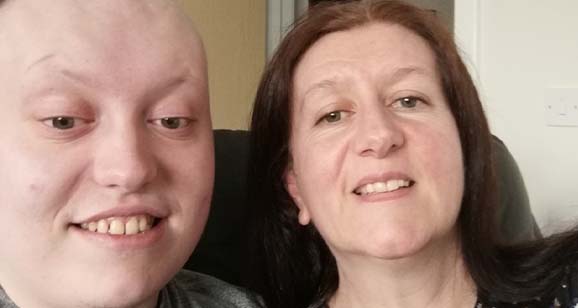 Jan’s son Peter has been living with epilepsy since he was young child. Here Jan explains how she felt when he was diagnosed, how the COVID-19 has impacted on him getting the support he needs and the benefits that Jan has received from Epilepsy Scotland’s check-in service.

How did you feel when your son was diagnosed with epilepsy?

I was actually quite upset and because at that time he was non-verbal and it was epilepsy that was stopping him from talking.

When they told me, he had a rare condition called Landau Kleffner syndrome that is when I was devastated by it.

But the medication that they gave him helped and he started talking when he was about five or six years old and now, he is non-stop talking.

I am now alright with it because way back at the start I was totally devastated. You learn to live with it.

What type of seizures does he have and how does it affect him?

It is mainly at night-time he has his seizures. It is tonic-clonic seizures that he has.

There are mostly absence seizures that he will have during the day and I just count seconds just to see if he actually comes out of them or if he is going to have a full-blown seizure.

But thankfully it lasts seconds at most and then that is him he back. I just say to him that are you back with me now Peter and he will just look at me sometimes he will just laugh or say yes.

What challenges has he faced since being diagnosed with epilepsy?

That is a tricky question because there has been lots of challenges. I would say the doctors at the start were very good when he was diagnosed.

But before he was diagnosed, that was a challenge getting him diagnosed. Then the challenges have been not being able to go out by himself.

Also, there was once kids outside who targeted my son and we had to phone the police quite a lot. We got stones and balls thrown at the window. That wasn’t very nice getting all that done.

I would say Peter has overcome quite a lot of challenges and by going to Sense Scotland they have built his confidence up.

An example would be the touchbase band.

At Christmas time, I would say to him let’s just stay and listen to the band, we haven’t got anything else to do. I don’t know if he thought to himself, I would quite like to do this, I don’t know.

But they brought him in to the music room just for one hour a week and he got a one to one session and that built his confidence up and now he is actually part of the band.

Have you noticed any impact on getting support from epilepsy services during the pandemic?

The only support was from Stuart at the Epilepsy Scotland helpline. That support has been absolutely amazing.

It was the actual practice nurse who phoned me over and gave me the number.

I gave the number a call and explained to Stuart that my son’s got epilepsy, he doesn’t like speaking on the phone. So, from then on that’s when the support really started. It has actually kept me quite sane.

What are the main benefits of the check-in service?

I think talking to Stuart. That support has been really good and when I say things to Peter about it like Stuart said this or Stuart said that.

For example, having your face in games, as he likes to play the Playstation and I say that Stuart says that is not very good for you.

I can see in his eyes. His eyes look really heavy and tired. I say come on you come off that and using Stuart is quite good because then he will listen to me saying that because I can say Stuart said this and that, as he won’t listen to me saying it.

Has your son attended any virtual clinical services like speaking to his epilepsy specialist nurse or consultant over the phone? How have you found these kind of services?

I would say it was quite strange. I had a virtual session with a Epilepsy Specialist Nurse (ESN) and Peter wasn’t in a good mood to be having a consultation and it wouldn’t matter if it was actually at home or before COVID and the ESN was allowed to come into the house or Peter was going to see them in their consultation room, he just was in a stinker of a mood.

I had to say to them that I am really sorry, I can’t hear you very well. You are going to have to speak up a bit because Peter was very grumpy and shouting and saying he didn’t ask for this and didn’t want this. He wasn’t accepting their video call.

Whereas, every year, Peter has a consultation with his doctor when I spoke to them about Peter’s sleep, they told me to read this book and that should help Peter get off to sleep. I thought reading a book isn’t going to help him get off to sleep.

But maybe there might be some hints that I can use to get Peter off to sleep. But everything I have tried, Peter is the kind of person who will do it in his own time.

What would you say to someone who is thinking of joining the check-in service?

I would say definitely join it because it helps you big time. It’s for the person’s mental health especially If you don’t have a lot of contact during this time.

It has been great for Peter’s mental health, even though I am talking to Stuart at the check-in service, because I am taking back the information that I am getting from Stuart and I am saying to Peter that Stuart said doing this is better for you. It also helps my mental health as well.

If you want to register with our check-in service, please get in touch on 0808 800 2200 or email contact@epilepsyscotland.org.uk.