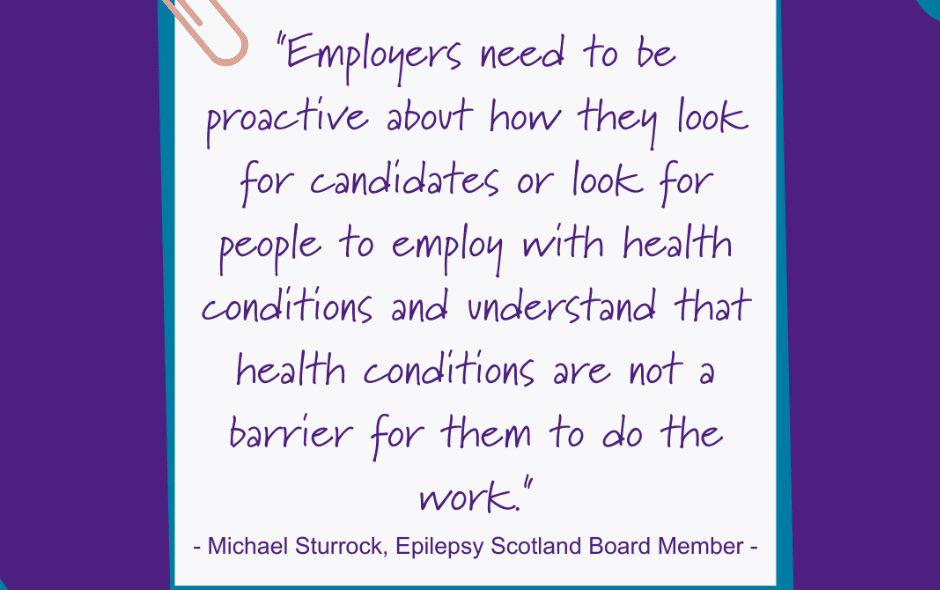 In the latest episode of our Talk Epilepsy Podcast, we talked to Ross Bennet, a former Detective Superintendent with Police Scotland, and Michael Sturrock, who works in politics as Head of Communications & Outreach, as part of our #EpilepsyAndEmployment campaign.

Both Ross and Michael shared their experiences of living with and managing their epilepsy, support received from their employers and their thoughts on what employers need to do to better support people with epilepsy.

Below are some of the highlights from both interviews. To listen to the full podcast, please click here.

How did you feel when you got diagnosed with epilepsy?

Michael: It was interesting because epilepsy was something that was completely off my radar.

When I had my seizures, first of all, they talked about how it was quite common in adolescence, boys, in particular, to have seizures even though they are not necessarily epilepsy.

So, for a while, it wasn’t clear that I had epilepsy and then when we discussed it became likely.

Again, because I was on the boundaries of a diagnosis of epilepsy it still wasn’t clear that I had epilepsy for a little while probably after my second seizure.

Since it had been going on for a while, I was kind of eased into it gently. I felt quite supported and I had been to see a neurologist quite a few times before being officially diagnosed with epilepsy.

Do you feel like you have faced any barriers or limitations in your career because of your epilepsy?

Ross: Yes, that would be fair. Epilepsy does cause at times crisis in confidence.

Not in have I made the right decisions here because I knew I would.

In that regard, every time there was a limitation until I was absolutely sure I was at a ceiling when I thought yes, I can do the next part now no problem.

Everyone around me was saying you can do that standing on your head. That’s fine other people saying it but you have to convince yourself.

Michael: I don’t actually. I’ve talked about it quite openly every time I have been to a job interview and been in the process of being hired or getting a job or setting myself up in the office.

Or just with colleagues making them aware of my circumstances. I’ve never felt that I have been actively discriminated against in terms of employment.

You can never get inside someone’s head but you think that some people might be worried or don’t know what epilepsy means or don’t know whether to them you are ‘normal’.

There are maybe thoughts that go through people’s heads that I am conscious of maybe rightly or wrongly conscious of or perhaps imagining people having.

So, I don’t think there is any structural impediment to my employment experience. But there are these sorts of stigma things behind the scenes that can have an effect on how you perceive or are perceived.

What type of support have you received from your employers to support you in your career?

Ross: I had quite a lot. To begin with, I didn’t know what triggered my seizures. For example, whether it was flashing lights so I had a screen across my computer.

What do you feel employers need to do to better support people with epilepsy?

Michael: It is all about understanding. I think Epilepsy Scotland does great things in training and organisational awareness.

You can never do too much to teach yourself about epilepsy and other health conditions and how they affect people on a day-to-day basis and what can be done to support them.

It is about talking and raising awareness frankly. Of course, using services and organisations like Epilepsy Scotland to help them raise awareness as well.

What advice would you give to anyone with epilepsy worried about their career prospects?

Ross: Know yourself. That is the best advice I could give. If you are really looking to go for something, go for it. You have one shot at life. Stand up for yourself, stand up for your rights.

Know your occupational health. It is your own decision if you want to say you have epilepsy on an application form.

It’s about focusing on the positives as well as the negatives. Have good references and record what you have done.

People are scared of epilepsy, there is a social stigma towards epilepsy. Will that go away in the next generation? It will improve in my view but won’t disappear.

The biggest advice I could give is if you want to do something, you are good enough, try and do it.

For more information about our #EpilepsyAndEmployment campaign, please click here.