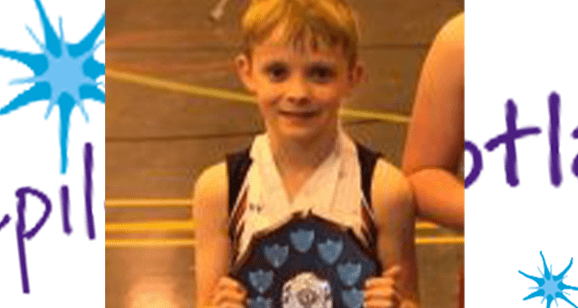 A big thank you to Ryan who has raised almost £2,000 for Epilepsy Scotland by attempting to complete 5,000 circles over his pommel horse in just one week! Here he shares why he is taking on this challenge.

Ryan is nine years old. He had his first seizure in April 2018 and was diagnosed with epilepsy in May 2018.

Ryan knows that epilepsy is a part of his life now and he takes medication twice a day.

Epilepsy hasn’t stopped him doing what he loves.

He started gymnastics at the young age of four years old and is an elite level gymnast and trains at Hamilton Gymnastics Club, for 20hrs a week (during normal times). Also, he is part of the Scottish Gymnastics Performance Pathway Programme.

His dream would be to compete in the World Championships or the Olympics!

To help raise money for Epilepsy Scotland, Ryan came up with the idea to create a challenge which will see him attempt to complete 5,000 circles over his pommel horse in just one week from 1-7 March!

Ryan told us: “Anyone who knows me will tell you how much I love gymnastics, my epilepsy hasn’t stopped me training hard and doing what I love.

One day I would love to compete in the World Championships or the Olympics, it would be a dream come true. I decided I wanted to raise money to say thank you to all the doctors and nurses who have looked after me.”

What a fantastic idea for a challenge, if you would like to support Ryan, please click on the link here.

We wish him all the best with his future and can’t wait to hear how well he is doing!

We were delighted when Ryan took on this challenge to help raise money for Epilepsy Scotland. You are a ray of sunshine!