My experience of living with epilepsy

Home > Latest news > My experience of living with epilepsy

We are looking to encourage people to start talking about epilepsy and share their experiences. Each month, we will be sharing these on our website and on social media.

This month, Shona shares her experiences of being diagnosed at a young age and how epilepsy has affected her.

It was daunting and I suppose I was a little bit scared. It had been in the family and it wasn’t such a major thing because we had been brought up talking about epilepsy, since my grandfather had it anyway.

So, it wasn’t totally unknown to me. I think because the age I was, at the time it was a bit scary.

How difficult was it being diagnosed when you were 15?

The diagnosis took a little while because they had to wait until I had two or three seizures before they would diagnose as epilepsy. At the time, I was going through my O grades, so I had the stress of that as well.

All these questions were in my head. In the end, I decided not to go to University. I stayed on the island where I live and went to college there.

I think some of that was because I was scared about going to a big city and something would happen, and I didn’t know how people would take it.

What type of seizures do have? How does it affect you?

I have grand-mal (now known as tonic-clonic) seizures. But I haven’t had one for 10 years. I am one of the lucky ones and my medication does help. Also, I always know when I am about to have a seizure.

But luckily everyone in the family knows what to do and how to cope. I did lose my driving licence many years ago for a year. But since I got that back, I have had no issues with my epilepsy at all. 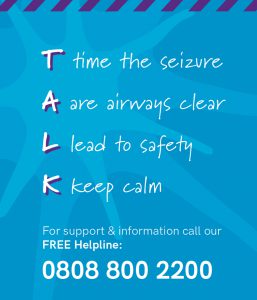 I think job wise I have been lucky because all the jobs I have had, my employers have understood. I told them at the very beginning, and it is there if they want to stigmatise me then they can.

But they never have.

They have always been very good and understanding. It did knock my confidence when I was first diagnosed. At the age of 15, it does knock your confidence.

That has been a big challenge. You think if I go out, in a crowd and if I have a seizure, people who don’t know me are going to think this or that. It did knock my confidence for a long, long time.

But you just get through it. There are people a lot worse off than I am, so it is just one of those things.

Also, I can’t go swimming in case anything happens in the pool. I wouldn’t go out cycling as well. There are certain things and sports that you just can’t do. All in all, I have faced a few challenges but overcome them. I have been in the same job for over 20 years. I probably have got as high as I go in the job and my epilepsy has not held me back in that way.

Find out as much as you can about epilepsy. Find out the pros as well as the cons because it is not always negative. A lot of what you read is negative reports.

So, I would say look at the pros as well as the cons. But don’t let it stop you, if there is anything you want to do, do it. If you can do it.

If you would like to share your experiences of living with epilepsy and join in our #TalkEpilepsy campaign, please email  David Coates our Communications Officer on dcoates@epilepsyscotland.org.uk or call 0141 427 4911.

We use cookies to ensure that we give you the best experience on our website. If you continue to use this site we will assume that you are happy with it.Ok