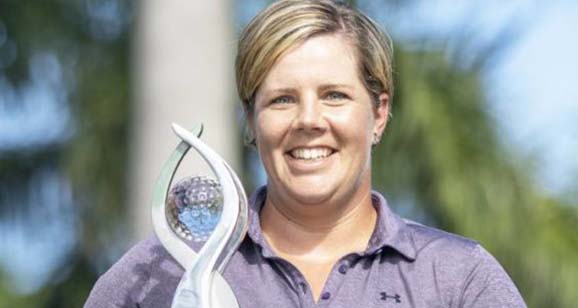 Professional golfer, Jane Turner, shares her experiences of being diagnosed with epilepsy and how she felt when she won her first professional golf tournament.

Jane Turner was diagnosed with epilepsy when she was 22 years old. Her first seizure and diagnosis came out of the blue.

However, Jane hasn’t let her epilepsy diagnosis get in the way of her professional golf career.

Jane said: “I didn’t have my first seizure until 2012. At the time, I was 22 years old, and it came completely out of the blue.

It was in the evening as well, because I’d been at the gym with my friend and came back and was making dinner. I went through to the porch to tell my dad his dinner was ready. Then I don’t remember the rest.

All I can tell you is from what everyone else who saw and told me what happened.

Apparently, I just spoke like muffled out gobbledygook rather than telling him his dinner was ready and then just collapsed on the floor, having a full-blown seizure.

The first responders came and then the ambulance took me to A&E. I timed it right because the next morning was when the consultants were having to check in for people with epilepsy.

Meeting with the consultant

The next morning, I saw the consultant and they sent me for MRI scans. I then found out that I had a brain tumour.

That’s not something you expect to hear. It’s not cancerous and it’s only a tiny little thing called DNET. And it’s been there all my life, so, it’s just a little clump of cells that don’t separate when you’re developing in the womb.

They told me that the majority of people who have that kind of brain tumour actually get their epilepsy when they’re just small children or they might go their whole life without even knowing they’ve got one because nothing happens.

I was quite embarrassed by it because people just assume it’s just this strange, strange thing and people have seizures.

Fortunately, the medication they put me on first actually worked.

I know a lot of people come on and off gradually until they get one that works for them. But the first one they gave me actually worked.”

At the time of Jane’s diagnosis, she was one of the top amateur golfers in Scotland winning the Scottish Ladies Strokeplay Championship in 2012 and becoming British Universities Ladies Champion in 2009 and 2010.

The biggest challenge that Jane had to cope with after her epilepsy diagnosis was losing her driving licence.

She said: “You have a seizure, you lose your driver’s license. That’s it and having to get yourself to tournaments with suitcases and golf clubs without being able to drive, that just doesn’t happen.

I was quite fortunate that that my family and my friends, the majority of my friends are also golfers, were really helpful in driving me to places.

That was for sure the most difficult thing about it because people can be very judgmental.

When you get on a bus in the winter with snow around you, with a set of golf clubs and people looking at you like, where’s she going?

I actually never found out for over a year that losing your driving licence to epilepsy, you get a free bus pass. So, I paid a lot of money for bus fares!”

Did she imagine that when first diagnosed with epilepsy she would go on to have such success in the professional ranks?

Jane said: “Yes and no. I knew It was what I wanted to do. When I was first diagnosed, in 2012, it was my final year as an amateur and it was my most successful one.

It made me know that I can do this. It’s not going to be a massive problem for me. And again, it was just because of the people that I had around me and the team I had around me in terms of my coaches.

When I won my first professional tournament in 2017, the pride that came with that was just massive and, you know, everyone’s obviously proud when they win their first tournament but for me it just came even more because of what happened in the past.”

What would Jane say to someone who has been recently diagnosed with epilepsy?

She said: “Just to keep as strong as possible and to keep your family around you or your friends around you, don’t push them away.

I think that’s something that’s very easy to do, it’s just to go and hide yourself away because of the stigma that comes with it.

You just need to keep strong and learn as much as you can. I think I learned a fair bit from phoning the charity helpline that you guys have.

Remember to take your medication on time, because that’s how it’s affected me massively, so don’t forget.

You know, you’ll get your medication to work. You’ve got your consultants to help you and there is help out there. You just need to take on.”

You can listen to the full interview with Jane on our latest episode of our #TalkEpilepsy Podcast available to download by clicking here.