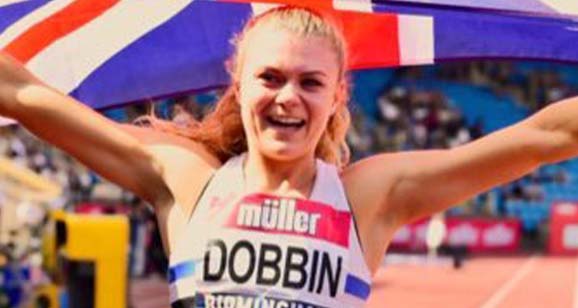 British athlete, Beth Dobbin, shares her experiences of being diagnosed with epilepsy as a teenager and how she hasn’t let her epilepsy get in the way of her athletics career.

Beth Dobbin was diagnosed with epilepsy when she was just 14 years old. Just over 10 years later, Beth would become British 200 metres champion and break a 34-year-old Scottish record.

The 26-year-old hasn’t let her epilepsy diagnosis get in the way of the thing she loves doing the most, running fast around an athletics track.

Beth comes from a sporting background with father, Jim Dobbin, a former professional footballer with Celtic, Barnsley and Grimsby.

She said: “I was a very sporty child and loved sport when I was younger.

My dad used to play football and he retired quite late, so I just remembered when I was younger that he was really active around the house and always doing exercise.

I started to go for runs with him at the weekends and kind of got into athletics through the long-distance route.

I pestered him to take me down to the athletics club and he did when I was a teenager and I just absolutely loved it from there.”

Beth has been living with epilepsy for 12 years and was diagnosed when she was just 14 years old. She recalls what happened when she had her first seizure.

Beth said: “I had quite a huge seizure at school and it was quite a big seizure.

I lost the movement temporarily from one side of my body and I remember when I was diagnosed, I didn’t really understand.

I knew that this awful thing had happened to me and it was a traumatic day at school and had a few days in hospital after that.

It changed a lot of things in my life. I was put on medication and just felt that this traumatic thing had happened and my life had changed from it.”

Like so many people who are living with epilepsy, Beth feels it is more than just seizures. Even though, she has been seizure free for a long time now and is off medication, she still worries about having a seizure.

Beth said: “Even though the seizure was really bad and it was an awful experience to go through, for me the worst part about epilepsy is kind of how it plays on your mind and the worries you have about a seizure striking.

Even just this morning, driving to the track, I felt a kind of spasm in my neck and then you are just in a panic for the rest of the day, wondering if that had something to do with it because when my seizures first started, the first things I had was neck spasms.

It still never goes away. Every day you think about it and worry will a seizure strike today.

I am bit stressed out at the moment, will that lead to a seizure, because I didn’t really know why my epilepsy came on or what caused it, that’s created a lot of anxiety as well because you don’t know if you are doing something that could potentially cause another seizure to happen.”

In 2018, Beth became British 200 metres champion for the first time and also broke Sandra Whittaker’s Scottish 200 metre record which had stood since 1984.

With all the challenges that her epilepsy diagnosis forced her to go through, Beth said the success wasn’t something she had envisaged.

Beth said: “It was just a dream come true. I didn’t see myself going on to be the athlete that I have because I have done my athletics because I enjoy it and it is something that I have always done.

I never really saw myself having the success that I did especially from where I came from because of the whole having epilepsy and being on medication as a teenager.

My performances were quite affected by that. I wasn’t running particularly quick when I was younger and my medication held me back quite a lot.

For me, it has been really nice to come off my medication and then feel more like myself and be able to go on and put in some good performances and do well in my athletics.

I know many athletes who are still on their medication and can manage that as well. I don’t necessarily think it is a case of you need to be off medication to do well in sport.

For me, the medication that I was on came with a lot of side effects and I know it definitely affected my performances because as soon as I came off it, I could see a difference in my performances.”

Beth has competed in World and European Championships representing Great Britain in the 200 metres.

However, one thing is missing from that list and that is competing at the Olympic Games. With last year’s games in Tokyo being cancelled due to the COVID-19 pandemic, Beth is hoping to become an Olympian.

She said: “It was really devastating when the Olympics were cancelled last year. But obviously it has been an awful time and awful things have happened in the past 12 months.

I am really hoping this summer, the Olympics can go ahead and it will be really nice for everyone to see the biggest sporting event that we ever have back on this year, even if behind closed doors.

I know athletes want to get back on the track and becoming an Olympian is definitely top of my priority list.”

What would Beth say to someone who has been recently diagnosed with epilepsy?

She said: “It will always get better. I think from my perspective it was a bad time and it had to get worse before it got better.

However, there will be a time where you will find medication that works for you or just different ways that you will find to cope with the anxiety of having a seizure or the worry around it all.

Just be patient, it will get better and it can be helped by having a really good support network around you, friends and family to talk to and if you are worried about anything don’t hesitate to discuss with them.

That’s where I went wrong, I bottled everything up and was too embarrassed to tell anyone but actually when I did people where so supportive and understanding and I felt why didn’t I do this sooner.”

You can listen to the full interview with Beth on our latest episode of our #TalkEpilepsy Podcast available to download by clicking here.