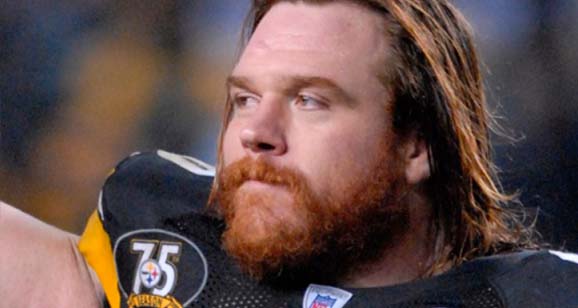 Former NFL guard, Alan Faneca, shares his experiences of being diagnosed with epilepsy as a teenager, winning the Super Bowl and being selected as a member of the Pro Football Hall of Fame.

Alan Faneca reached the pinnacle of his sport by winning the Super Bowl in 2006 with the Pittsburgh Steelers.

Standing in the middle of Ford Field in Detroit with the Super Bowl trophy, it marked the end of an incredible journey for Alan who was diagnosed with epilepsy when he was just 15 years old.

Alan describes how he felt when he was diagnosed with epilepsy as a teenager.

He said: “I was 15 years old. A freshman in high school and had my first seizure on Christmas Eve that year and it was kind of like a nightmare, just running around scared and crying.

Shortly after that we learned that I was diagnosed with epilepsy. I was definitely very fearful at first. Kind of confused of my role in life.

Where is this going forward but I had a really good group around me that was very helpful and helped me through this process and I quickly learned to flip it around on anybody who had a problem or were scared about me having epilepsy.

I am now very fortunate that as long as I am on medication that I am seizure free. I take my medicine three times a day and stick to it.

Early on there was definitely a lot of challenges. Dealing with being in high school and dealing with normal teenage life stuff and trying to live my life as normal as I could and still being normal Alan that I wanted to be.”

Alan began playing American football when he was eight years old and was always into a variety of sports including baseball, basketball and athletics.

When he was diagnosed with epilepsy, he was worried that this meant he wouldn’t be able to play such a contact sport that American football is.

He said: “Once we got past what this meant for my life and going forward with just regular day to day life.

Then we moved on to what this meant for doing sports, football specifically.

My doctor was very quick to say you are good go ahead and do it and chase your dreams.

I was a little surprised and had to double check and make sure and say hey doc you know what football is right? He said yes, I know go for it, don’t stop dreaming.

When he said that I was like let’s do it. I got the ok for him and I could keep playing football, I was excited.”

Alan would go on and play 13 seasons as a guard in the NFL and win numerous awards including being voted to the Pittsburgh Steelers 75th anniversary all-time team by Steelers fans and make nine Pro Bowl appearances.

However, the best moment of his career came in 2006 where he played a key role in helping Pittsburgh defeat the Seattle Seahawks to win the Super Bowl.

Alan said: “Amazing. Amazing journey. Looking at that 15-year-old kid not really sure what life holds ahead and then you flashforward and all of a sudden here I am holding the Super Bowl trophy and screaming on the field.

I still see pictures of that today and the hair on the back of my neck stands up. It was just exciting and a crazy journey when you think about it.”

Earlier this year, Alan received the honour of becoming a member of the Pro Football Hall of Fame in recognition of a stellar career.

He will forever be enshrined at the Pro Football Hall of Fame in Canton, Ohio and join the selected few who have received the honour.

He said: “It was really exciting. I had been waiting for a couple of years, to get the knock as we call it.

They sit you down and go through the orientation and you realise how selected few that there are compared to the vast numbers of people who have played football, there is this little tiny group and all of a sudden you are inside of it.

It still has completely hit me yet.”

Alan has been living with epilepsy for 29 years. Here is what he would say to someone who has been recently diagnosed.

He said: “I would say listen to your doctors, lean on your family and your friends and it is going to be alright.

Lean on those two groups and talk to people and you are going to find your way out of it, find your own plan and path for your life.”

You can listen to the full interview with Alan on our latest episode of our #TalkEpilepsy Podcast available to download by clicking here.