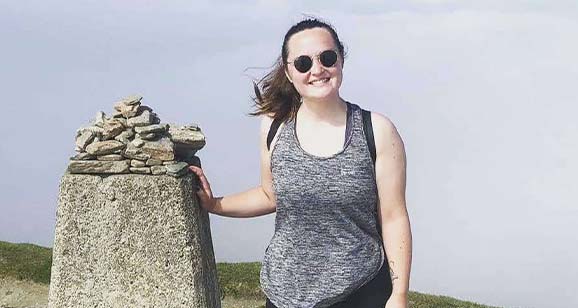 Writer Bridget McMillan recently interviewed Jemma who was recently diagnosed with epilepsy and shared her experiences ahead of Purple Day.

It’s been over two years since Jemma was diagnosed with epilepsy and for ‘Purple Day’ this year we decided to crank up the Zoom call to share her experience.

Epilepsy Scotland describes epilepsy as “one of the most common serious neurological conditions in the world. It is often defined as the tendency to have repeated seizures which start in the brain.

No two people experience epilepsy in exactly the same way. It can affect anyone, irrespective of their age, gender or background, but it is more common in childhood and in later life.”

Jemma hadn’t really spoken about her epilepsy to anyone other than her doctors and jokingly warned that her story could either be “really depressing… or really interesting.”

Her friends describe her as positive and confident, and even though it’s a heavy topic to discuss, her positivity remains constant throughout our conversation.

She first started feeling ill when she was 25 and was diagnosed just after her 26th birthday. On 15th March 2021, she celebrated being two years seizure free.

Jemma remembers the first time she knew something wasn’t right. Prior to falling ill, she worked as a tour guide, driving tour buses around Scotland.

She had woken up early to do a tour to Loch Ness and was in the middle of her morning routine: get a coffee, have breakfast, get ready, change clothes etc.

She remembers standing in the kitchen, just after making her coffee and the next stage of the routine would be to go through to her bedroom and put her make-up on.

However, instead of going back to her room, she came to and realised she was standing in her flatmate’s room at 6:30 in the morning. It was only a 10 second walk from the kitchen to her flatmate’s bedroom but Jemma has no recollection of how she got there.

She stood in the doorway confused and admitted to her flatmate, “I have no idea why I’m here, I’m so sorry” and laughed it off, but it did puzzle her and she spent a lot of time trying to piece it together.

She’d had headaches too but put it down to being tired and overworked – after all it was August, an incredibly busy month for tourism in Edinburgh.

When she got home from Loch Ness that day, she went straight to bed and felt fine the next day, and for the next couple of weeks.

But then something different happened. She was driving home from the gym when a rising nausea washed over her in waves and she started having flushes. “I was really hot and then… my head got really weird? It’s like waves of painful pins and needles, washing over your brain.”

She was still fully conscious and in control of her movements but pulled over in case it worsened. “That freaked me out because I was driving – if I lost my memory again, even if for 10 seconds… That’s where I started to panic.”

Epilepsy not on radar

At that time, epilepsy wasn’t even on her radar. She’d only heard of the condition through TV programmes and films but she never thought it would happen to her. “I actually thought it was a genetic thing.

Of course [on TV] they only show epilepsy in its most extreme version – falling to the floor, convulsing, that type of seizure… and I thought that was the only type of seizure.” She later learned there’s actually a broad range of symptoms and roughly 40 different types of seizures.

After telling her first doctor about her experiences, he advised it was probably just migraines and told her to go to the opticians, but having suffered from chronic migraines as a teenager, Jemma knew this was something else. She returned to the doctors and this time they suggested a neurologist.

They weren’t 100% sure but wanted to run some tests. Jemma still felt misunderstood. “In my head, a seizure was when you collapse, lose consciousness, so I thought ‘well, I don’t believe you, but sure, let’s go to the neurologist’”, she said skeptically, convinced they were wrong.

It took over six months to get the official diagnosis – and Jemma was lucky to be diagnosed so quick.

Most of that six months was waiting – waiting for appointments, waiting for results, different specialists and some more waiting.

She had an MRI scan, to check for any brain tumours; an EKG, which checks your heart; and an EEG, where they try to induce a seizure to check the brainwaves. Jemma wasn’t so keen on the latter but they had to do it.

It was a stressful time and Jemma lightly touches on how frustrating it can be when the people around you have their own opinions of what could be ‘wrong with you’.

She explains, “everyone seems to turn into a doctor – ‘no, you don’t have epilepsy’, ‘no, I know a person with epilepsy – he would fall to the floor, you don’t do that’, ‘there’s nothing wrong with you, I’ve not seen you ill.’”

Jemma noticed that people also became weary of her and distanced themselves from her, which, although upsetting, she looks at from their point of view and understands their behaviour.

People don’t always know what to say in those situations and she reflects that she wasn’t very sociable at that time either, which probably didn’t help, “I don’t hate them, or blame them for it – people react to things differently.”

“I was actually finally happy when I got the diagnosis. It was a relief.” When the doctors first started suggesting epilepsy, Jemma wanted to know everything about it, and took to Google – even though everyone says not to.

She would go through the information thinking “Aw yeah I do have that, aw yeah that is like me… huh, maybe they’re right?”, so when Jemma finally got diagnosed, she took it in her stride and was happy that they could now start trying to fix it.

The diagnosis did bring about some major changes for Jemma. Due to the risk of seizures (in any form), her driving license was suspended and eventually revoked, so she had to change jobs.

When Jemma explained to her boss that she was being tested and was unable to drive tour buses, she was quite taken aback by his response: “Well, there’s nothing more we can do for you then… we’ll just tell people you’re handing in your notice.”

Hearing this, she wasn’t sure how she would cover her next rent or pay bills, and in the midst of that stress, she accepted her boss’ answer.

It was only later on that she had second thoughts about his response and raised the issue with the HR department under the Equality Act. That dispute went on for over a month, and due to the stress, her seizures tripled during that time.

After a lot of meetings, HR eventually ruled that Jemma could not lose her job on the basis of her illness, and she was moved to the retail shop of the tour company.

However, she did not have a good relationship with her manager, and eventually decided to leave. “I wish I had taken some form of legal action, but I was so ill and upset that I couldn’t do it.”

Jemma has spoken to others about this and was shocked to find out how often it happens to people with disabilities.

As Jemma’s been seizure free for over a year, she has her driver’s license back now – but she won’t be able to drive buses again, and can’t do any kind of work that relies on driving.

Compared to other people with epilepsy though, Jemma hasn’t had to change her lifestyle too much. For the first year, the main focus was controlling the seizures, for which she relied heavily on the medication.

Jemma takes medication twice a day, every day, which has had a hugely positive impact – she hasn’t had a seizure since she started the medication, which is an amazing milestone!

She does occasionally have ‘off days’ and a few headaches or brain fogs but she’s able to manage the seizures.

With her seizures under control, she’s able to try new things and make small changes.

She admits she was never really a fan of exercise but with more free time, she was looking to take up new hobbies and decided on outdoor running – “that’s something to keep doing, that helps a lot!” she encourages and then quietly confesses: “to be fair, the doctor said it would help but I didn’t listen.”

The headaches reduced, her mood improved and she has much more energy. She also does yoga and pilates and explains why she decided on these: “If anything goes wrong, you’ve got a mat and you’re close to the ground.”

Although she seems slightly embarrassed to talk me through this reasoning, she laughs and says that if she were to take ill during the practice, the instructor might just think she’s lazy and terrible at exercise – less attention.

Reluctant to talk about epilepsy

Generally after receiving potentially life-changing news, the doctors’ advice is to talk to friends and family about it, but Jemma winced at that idea. “I deal with it better by myself, she explains, “I need to process this in my head first, before I deal with other people’s reactions.”

Her doctor suggested looking into support groups instead, where you could meet other people with epilepsy and talk to each other.

Although this idea didn’t really appeal to Jemma either, she did look into different support groups online and came across epilepsy charities on Facebook, such as Epilepsy Scotland – anybody in Scotland who has epilepsy, or knows someone with epilepsy can join their support group.

Jemma’s not the type of person that wants to hear cliches like ‘you’ll feel better after a sleep’ or ‘aw, get better soon’, and her description of online support groups is her idea of paradise, where people can moan and rant, ask questions, and just talk to someone else with the same experience – “this I can deal with, this is for me.

It’s not a case that you’re looking for sympathy, people will just comment and relate.”

How can people support someone with epilepsy

The past two and a half years have been full of ups and downs but now she’s found the balance and is in the best place she’s been in since it all started. “It’s just finding what’s right for you.”

Although Jemma has accepted that she has epilepsy, a small part of her likes to think the doctors might still turn round and say, ‘it’s all been a big mistake, it’s not epilepsy.’

How can other people support someone with epilepsy? “People don’t really know what to say or how to help so the best thing to do is to just ask ‘Is there anything I can do for you? Do you want me to leave you alone?’ Easiest thing is just to speak to the person.”

Any parting advice or words of wisdom? “Epilepsy is something that needs to be taught about more. Epilepsy is more than just flashing lights and one type of seizure.

There needs to be more education and awareness about it.” Then she gasps and frantically blurts out the most important thing to note: “Oh, by the way, don’t stick something in someone’s mouth if they’re having a seizure!”

Thank you to Bridget for writing this article and to Jemma for sharing her experiences of living with epilepsy. You can read more of Bridget’s articles on her website.