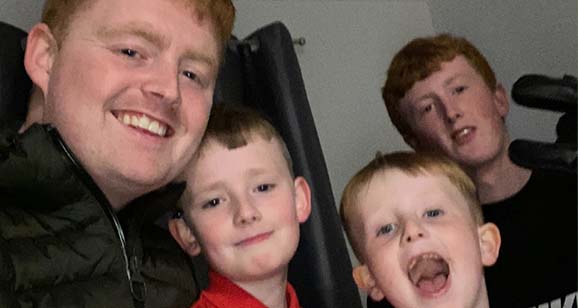 I’ve been living with epilepsy for 12 years now. When I was first diagnosed I felt that everything I was working towards had been undone.

Dreams and targets I had at the time had been literally crushed. It was hard to accept at the time but with support from my family, friends and Epilepsy Scotland it all helped me keep a strong mindset and it got me through it all.

If anything, the epilepsy has made me stronger because instead of letting it drag me down I grabbed a hold of it in the ways of mental progress.

I realised over the first six months that I shouldn’t let it take me so as I said I took it.

I was apart of my High School’s support group from Epilepsy Scotland and I’ve always been good at opening up and giving advice about depression and mental downs that epilepsy can leave you with.

Impact of the pandemic

COVID has brought me surprisingly closer to my 16 year old little brother and in fact a-lot closer to the rest of my family and also Epilepsy Scotland.

Although its been hard work, it has also been good in a sense of being able to relax and also look at other possibilities of work and how I spend my free time.

For example exercise, my personal health (diet and mental health) and hobbies such as recording music on my decks.

At first I assumed that COVID would do nothing but bring me down but once again in my life instead of letting the situation bring me down I grabbed a hold of it and I’m still happy to do what I did at Epilepsy Scotland and guide others in the same direction.

The biggest challenge I have faced through the pandemic has simply been the frustration of not being able to socialise as much as I would have done if COVID wasn’t a thing.

Although I have kept in touch with friends over social media its obviously not anywhere near as socially interactive as going out to meet them.

I’ve overcome this issue through focusing on my hobbies such as recording music sets on my DJ Decks and exercising (for example going long range cycles and jogs).

These assist my mental health by giving me something else to concentrate on except from being unable to spend time with friends which is definitely a downer to not just me but others I know too.

I have no real anxiety about this because I have a theory that life from the pandemic will never quite be the same again.

I think life will always be a little different because I believe a lot of people over the world may have a different view of life, as in the way of being more thankful of the people they have and being able to be near friends.

Personally the Epilepsy Scotland support team/group has been great for me because it give me the ability to share my thoughts, listen to other people’s feelings and give advise about how to deal with any ongoing issues.

Just being able to have personal catch-ups on zoom calls with Epilepsy Scotland’s wellbeing team is a definite benefit for me, as in the ways of the zoom meetings being a form of social contact with a friend and it personally means a lot to me.

Epilepsy has affected me more than just seizures because like I said at the beginning of this it undone all hopes and dreams I had for the future.

Over time, I managed to adapt but it took a long time and over a lot of that time depression took a hold of me and left me in a dark place.

Thankfully I found a light and I am still following that. Eventually I may find complete happiness and I am confident that day will eventually come.

What I would say to someone newly diagnosed

I would tell them the side of my story that I grabbed hold of the epilepsy as it made me a stronger person in the end.

Also, I would remind them that as long as your willing to try, it is always possible to make yourself stronger no matter how much the epilepsy has affected their life.

I’d like to add that although epilepsy is a major dampen on any person that is diagnosed, life it is always possible to make themselves a stronger person on the inside and out as long as they are willing to put in the effort in.

The effort needed would always be a real major effort but it will always be worth the possible changes to a persons ability to enjoy life.